The General Social Survey (GSS) released data for 2010 last week, and according to Sociologist Darren Sherkat of Southern Illinois University, who boiled down the numbers, for the first time, more Americans support than oppose same-sex marriage. See the graph below: 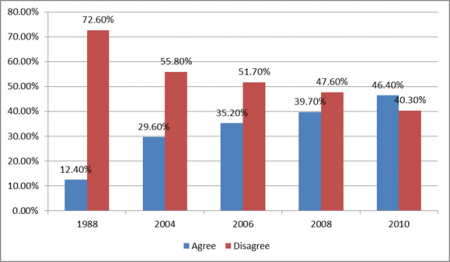 The General Social Survey (GSS) is a survey used to collect data on demographic characteristics and attitudes of residents of the United States. Since 1994, it has been conducted every other year. The survey takes about 90 minutes to administer. As of 2008 27 national samples with 53,043 respondents and 5,364 variables had been collected.  So that’s no small sampling done – over 50,000 people were interviewed for this.

In recent CBS polling, it’s clear to see over the past 8 years approval has been trending upwards and opposition trending downwards.  Gay marriage: 40%, Civil Unions: 30% and no recognition of same-sex couples rights: 25%