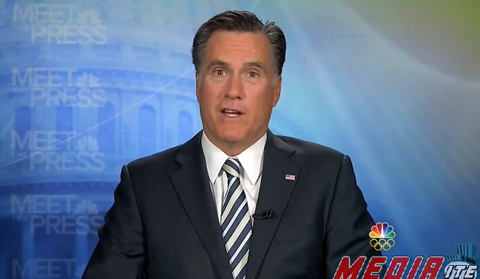 During an appearance this morning on NBC’s Meet The Press, failed GOP presidential candidate Mitt Romney was asked by host David Gregory if his position on same-sex marriage had changed. Not surprisingly, Romney responded it has not.

Gregory asked if the expansion of gay marriage rights has had a “negative impact on society.” Romney said that he believes marriage is an institution that exists between a man and a woman and the “ideal” situation in which to raise children is in a family with a father and a mother.

“I think it’s going to take a long, long time to determine whether having gay marriage will make it less likely for kids to be raised in settings where there’s a mom and a dad,” Romney said. “That’s not going to happen overnight. It’s something which happens over generations.”

Asked whether the conservative right had lost the fight over marriage equality, Romney said that the issue of “who wins and who loses” over this issue is irrelevant. “Sometimes, if something is lost, you move on to the next issue,” he concluded.

Speaking of “once something is lost” – why are we still asking Mr. Romney his opinion?  Hasn’t he lost enough at the ballot box that HE moves on?