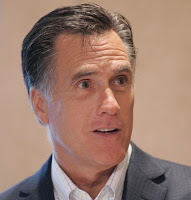 Mitt Romney may be feeling the heat from a recent vote by a group of evangelical leaders to back Rick Santorum’s bid for president.

Mitt Romney, the former Massachusetts governor, who once campaigned as a social moderate, is now talking up his opposition to marriage equality as he stumps in South Carolina.

ThinkProgress quotes Romney in a speech this morning objecting to President Obama’s decision not to mount a legal defense of DOMA:

“This is a president also who is attempting to pave the way for same-sex marriage in our nation by refusing through his attorney general to defend the Defense of Marriage Act,” Romney said. “I will defend that Act and I will also defend marriage as a relationship between a man and a woman.”

Just keep track kids.  This is what Mittens is saying now.  Who knows what he’ll say in the general election…