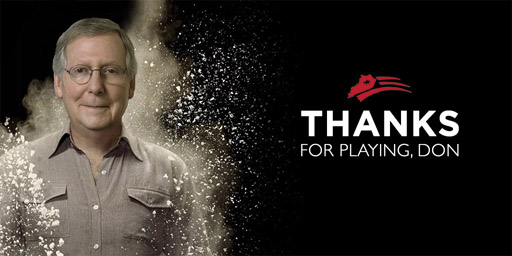 Last night was the first big night of mid-term election action as Indiana, Ohio and West Virginia held their primaries.

Republicans were highly tense over the possibility that coal baron, Don Blankenship, might prevail in the West Virginia race for the GOP nod.

Blankenship, who had gone to prison for his part in the accidental deaths of 29 coal miners, was surging in the polls in the final days before last night’s voting.

But McConnell couldn’t resist trolling Blankenship with a rather sassy image of himself seemingly covered in a white powdery substance with the caption, “Thanks for playing, Don.”

Via the Chicago Tribune:

The image appears to be a doctored promotional image from the Netflix drug lord series “Narcos.” The campaign’s meme superimposed McConnell’s face onto the figure of Pablo Escobar covered in white powder. The Hill‘s Will Sommer found the relevant promo.