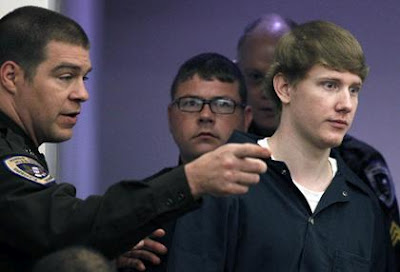 From USAToday: Deryl Dedmon, a 19 year-old Mississippi man, has pleaded guilty and received two life sentences for targeting a random black man for abuse and killing him with his pickup truck. It was later learned that the victim was gay and in a 17 year relationship.

Dedmon, 19, of Brandon, Miss., apologized to the family of 49-year-old James Craig Anderson. While partying with six friends last June 26, Dedmon suggested finding a black man to harass. Anderson was beaten before Dedmon ran over him with his Ford pickup. “I do not ask y’all to forget, but I do ask y’all to forgive,” he said before being sentenced for the murder and hate crime that was captured by a hotel security camera. AP writes, “As members of his family and the victim’s relatives wiped away tears, Dedmon said God has taught him not to see race and he is a changed man.”

The New York Times reported on the victim last August.

Mr. Anderson was a good country cook, a gifted gardener and always genial, his family said. He liked his job on the assembly line at the Nissan plant north of Jackson, where he had worked for about seven years. “If you met him, the first thing you were going to see was that grand piano smile,” said his eldest sister, Barbara Anderson Young. He made a point of taking care of old people and children and was helping his partner of 17 years, James Bradfield, raise the 4-year-old relative for whom Mr. Bradfield has legal guardianship. He sang tenor in the choir at the First Hyde Park Missionary Baptist Church and was so good “he’d have you falling out,” Mr. Bradfield, 44, said.