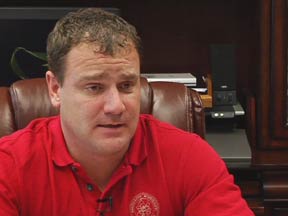 Mississippi’s Southaven Mayor Greg Davis admitted publicly for the first time in an interview with The Commercial Appeal that he is gay and has struggled to keep the issue from affecting his public life as mayor of Mississippi’s third-largest city.

“At this point in my life and in my career, while I have tried to maintain separation between my personal and public life, it is obvious that this can no longer remain the case,” Davis said Thursday afternoon at his Southaven home. “While I have performed my job as mayor, in my opinion, as a very conservative, progressive individual — and still continue to be a very conservative individual — I think that it is important that I discuss the struggles I have had over the last few years when I came to the realization that I am gay.”

In 2008, Davis, a Republican, ran unsuccessfully for Congress on a conservative, family-values platform.

He is currently under investigation for improper charges to both his city-issued and personal credit cards.