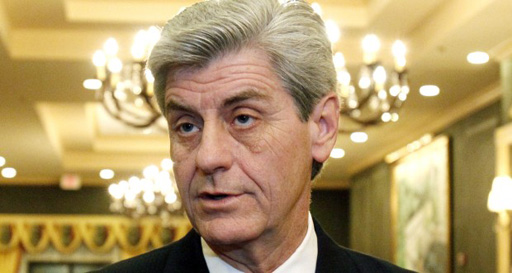 Mississippi Gov. Phil Bryant has signed into law the controversial and discriminatory HB 1523 which, in essence, legalizes discrimination against LGBTs in the state by purportedly protecting so-called “religious freedoms.”

The bill prevents state and local government agencies from taking action against state employees, individuals, organizations and private associations that deny service based on religious beliefs.

It does not prevent civil lawsuits based on claims of discrimination.

The measure’s intention is to protect those who believe that marriage should be between one man and one woman, that sexual relations should only take place inside such marriages, and that male and female genders are unchangeable.

Proponents say the legislation is an answer to states that have fined or taken business permits from companies that deny services such as event rentals and bakery services to same-sex couples.

Circuit clerks who do not want to give a wedding license to a same-sex couple could hand over those duties to a deputy clerk.

After signing the bill, the governor tweeted this statement: 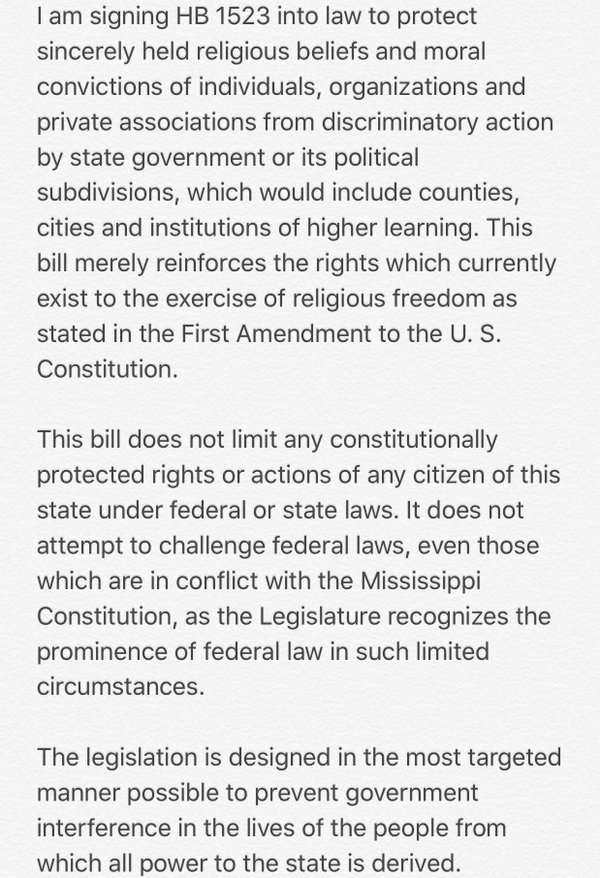 Immediately following the news, the ACLU issued this statement:

“This is a sad day for the state of Mississippi and for the thousands of Mississippians who can now be turned away from businesses, refused marriage licenses, or denied housing, essential services and needed care based on who they are. This bill flies in the face of the basic American principles of fairness, justice and equality and will not protect anyone’s religious liberty. Far from protecting anyone from ‘government discrimination’ as the bill claims, it is an attack on the citizens of our state, and it will serve as the Magnolia State’s badge of shame.”

“It’s embarrassing, shameful, and truly perplexing that the Republicans still don’t get it. LGBT Americans are entitled to equal protection under the law, just as everyone else. No exceptions. No allowances for discrimination. That we’re even still debating this in 2016 boggles the mind.

“‘Right to Discriminate’ measures signed into law by Republican governors are proof that the Republican Party’s leaders are stuck in the dark ages when it comes to equality and that they’ve been on a divisive path toward destruction since long before Donald Trump ran for president. In fact, the Republican National Committee has passed resolutions calling on state legislatures to pass discriminatory ‘bathroom bills’ targeted at LGBT youth and calling on Congress to pass a national ‘Right to Discriminate’ law that they cynically call the First Amendment Defense Act.

“No American should be discriminated against because of their sexual orientation or gender identity. That’s not very complicated, and that’s not who we are as Americans. It’s long past time for the Republicans to get the message.”