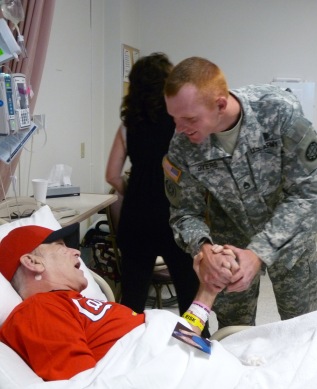 Mark Lindquist is a hero – an underpaid social worker who nearly gave his life trying to save three developmentally disabled adults from the Joplin tornado. Both houses of the Missouri legislature honored Lindquist, the Senate resolution calling him “a true hero and inspiration to others.”

The tornado’s 200 mph winds tossed Lindquist nearly a block, broke every rib, obliterated his shoulder, knocked out most of his teeth and put him in a coma for about two months.

He assumed workers’ compensation would cover his bills, but his claim was denied “based on the fact that there was no greater risk than the general public at the time you were involved in the Joplin tornado,” according to a letter to Lindquist from Accident Fund Insurance Company of America, his company’s workers’ comp provider.

“I think they need to take another look at the circumstances and revisit the claim,” state Rep. Bill Lant, R-Joplin, said. “What he did went beyond heroics.”

On the evening of May 22 Lindquist made his way to the group home occupied by Mark Farmer, Rick Fox and Tripp Miller, three middle-aged men with Down syndrome. Soon after he arrived, a tornado siren began to blare.

Because there was no basement or shelter and the residents moved too slowly to relocate, Lindquist placed mattresses over the men for protection, then climbed atop the mattresses for added weight.

The EF-5 tornado was among the nation’s worst ever. It destroyed more than 7,000 homes, including the group home, and killed 162 people.

Among the dead were Farmer, Fox and Miller, a fact that still haunts Lindquist.  “I loved them almost as much as I love my own kid,” he said.

After the storm, rescuers found Lindquist buried in rubble, impaled by a piece of metal. Large chunks of flesh were torn off. Bones from his shoulder crumbled as they placed him on a door used as a makeshift stretcher.

Relatives contacted every hospital within 100 miles of Joplin searching for him. None of the unidentified matched Lindquist’s description.

His injuries were so severe that his slender, athletic body had become swollen and unrecognizable. He was in a coma. Finally, after three days, he was identified by tiny brown flecks in his hazel eyes.

Doctors told Baldwin that if Lindquist survived, it likely would be in a vegetative state. Even in a best-case scenario, he likely would be blind in one eye, never regain use of his right arm, and never speak or think normally, she was told.

Lindquist’s recovery amazed doctors. His right arm remains in a sling, but he has use of the hand. The eye that was temporarily blinded has full sight. He moves slowly and has short-term memory loss, but speaks well.

His sister, Linda Linquist Baldwin, said the insurance company’s decision is unfathomable because if her brother hadn’t been at work, he wouldn’t have been hurt. He also could have jumped in his van and driven away from the group home as the tornado approached.

“I could have abandoned them to save myself, but I would never do that,” he said.

Since word of Lindquist’s plight spread, people around Joplin have pitched in, donating a few hundred dollars. Baldwin said her brother is touched by the kindness, even if it barely pays for the prescriptions, much less the medical costs.