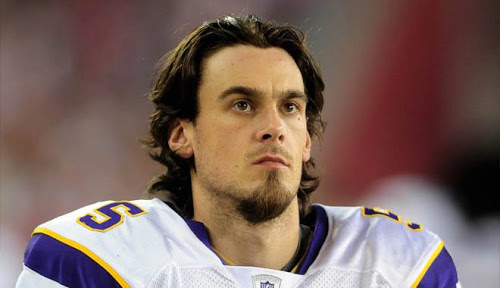 Minnesota Viking punter Chris Kluwe is an advocate for LGBT rights and marriage equality. He has recorded three radio ads for Minnesotans for Equality, the group fighting a November ballot that would constitutionally define marriage as opposite sex only.

Said Burns in his letter: “I am requesting that you take the necessary action, as a National Football League Owner, to inhibit such expressions from your employees and that he be ordered to cease and desist such injurious actions. I know of no other NFL player who has done what Mr. Ayanbadejo is doing.”

Here’s the closing part of Kluwe’s letter, published in full on Deadspin:

You know what having these rights will make gays? Full-fledged American citizens just like everyone else, with the freedom to pursue happiness and all that entails. Do the civil-rights struggles of the past 200 years mean absolutely nothing to you?

In closing, I would like to say that I hope this letter, in some small way, causes you to reflect upon the magnitude of the colossal foot in mouth clusterf*ck you so brazenly unleashed on a man whose only crime was speaking out for something he believed in. Best of luck in the next election; I’m fairly certain you might need it.

P.S. I’ve also been vocal as hell about the issue of gay marriage so you can take your “I know of no other NFL player who has done what Mr. Ayanbadejo is doing” and shove it in your close-minded, totally lacking in empathy piehole and choke on it. A**hole.

Ayanbadejo says of Mr. Burns that he’d “have to thank him more than anything for bringing national attention to the issue,” USA Today reports.

Ayanbadejo expressed surprise that Burns was trying to remove someone’s free speech rights: “For somebody to try to take that away from me I was pretty surprised, from a politician especially. People get fired for saying the things that the delegate said. People lose their jobs for discrimination…I think that whoever voted for him has their right to vote for who they believe represents their values. And if he represents their values, he’s the best person for the job. If Obama represents the best values for the country, he deserves the job.”

Added Ayanbadejo: “Its an equality issue. I see the big picture.”