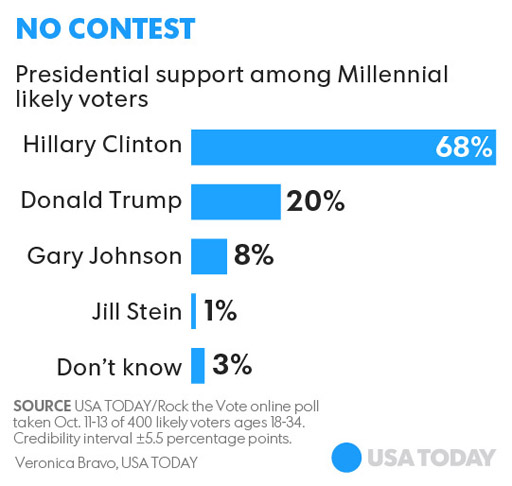 A new poll by USA Today and Rock The Vote shows Hillary Clinton way ahead of Donald Trump in the hunt for the millennial vote.

Trump’s numbers with this vital voting block are the lowest of any modern-day presidential candidate including Bob Dole who hit the low 30% mark back in 1996.

Perhaps most surprising is the data shows it’s not millennial women but the men who are causing the surge in voters 18-34.

Among millennial men, Clinton gets 65% support, with female voters in the same age group at the 47% mark. Trump’s numbers are much lower – 20% for men and 18% for women.

The first two presidential debates seem to have hurt Trump as a majority of those polled viewed him as less presidential and less credible after the face off. Clinton, however, registered “more presidential.”