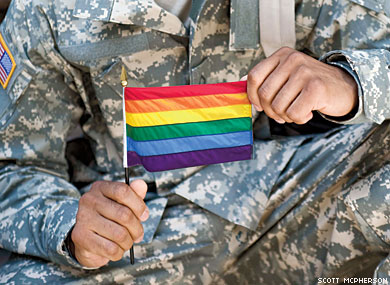 Cadets in uniform at Norwich University, the nation’s oldest private military academy, participated Monday in sessions about handling bullying and harassment as part of the school’s first gay pride week. The events are believed to be the first of their kind on a military campus.

Until last year, only a select few at Norwich knew of the sexual orientation of Joshua Fontanez, 22, of Browns Mills, N.J., a past president of the student government who quietly laid the groundwork for the school’s Lesbian, Gay, Bisexual, Transgender, Questioning and Allies Club, which held its first meeting the day the law ended.

“The aspects of my sexual orientation, how that played in the military, that was something I was willing to sacrifice, being open versus serving my nation,” Fontanez said. “It’s something I feel I was truly called toward and truly loved, so it’s great that I don’t have necessarily to make that sacrifice.”

For many of the newly open student leaders, the changes brought by the end of “don’t ask, don’t tell” haven’t overwhelmed, despite the years-long political wrangling that culminated in the policy change.

“It was definitely a big change, but it happened over such a long period of time for me that it didn’t seem like that big of a deal,” said Coast Guard Academy Senior Chip Hall, 21, of Monterrey, Calif.

The West Point Spectrum, modeled after the Coast Guard organization, is being formed with little fanfare.

“Everyone has been very professional here at the academy,” said West Point Cadet Andrew Fitzsimmons, 19, a sophomore from Algonac, Mich. “It’s been a very positive environment.”