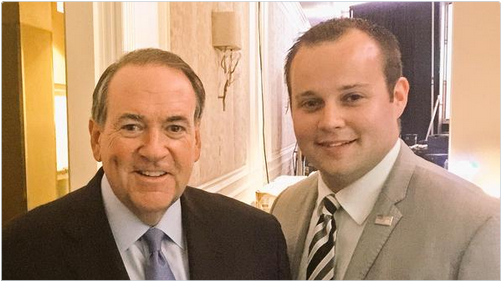 Janet and I want to affirm our support for the Duggar family. Josh’s actions when he was an underage teen are as he described them himself, ‘inexcusable,’ but that doesn’t mean ‘unforgivable.’

He and his family dealt with it and were honest and open about it with the victims and the authorities.

No purpose whatsoever is served by those who are now trying to discredit Josh or his family by sensationalizing the story. Good people make mistakes and do regrettable and even disgusting things.

There’s more on the Huckster’s FB page, but you get the picture.

Interesting that the Huckabees and Duggars of the world feel it’s perfectly ok to attack gays and lesbians from a position of moral superiority, but child molesters get to pray and it should all go away?