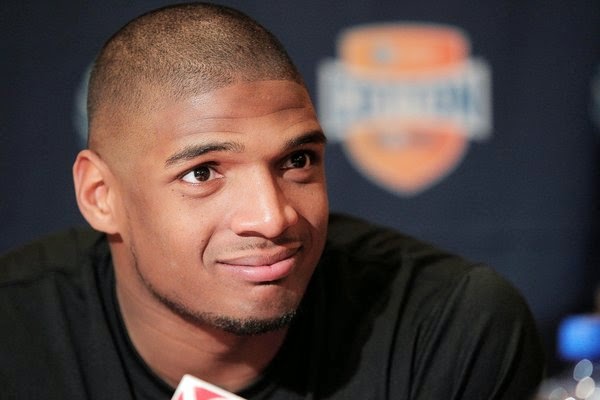 According to Chris Battaglia at The Score, the Montreal Alouettes are talking to Michael Sam about playing there in 2015 and the chances are “50/50” that the deal could work.

The possibility of Sam playing for the Alouettes has been up in the air since the St. Louis Rams released him at the end of preseason play. That was when it came to light that Sam was on Montreal’s negotiation list,  which means the CFL team has the exclusive right to sign him.

Sam has been a free agent since the Dallas Cowboys cut him from their practice squad in October.

The Alouettes were eliminated from the CFL playoffs in the East Division final after going 8-2 in their last 10 regular-season games. Defense was Montreal’s biggest strength, and adding a player of Sam’s caliber would give it arguably the best pass rush in the league.

Former NFL scout Russ Lande believes Sam’s body type and playing style are well-suited for Canadian football, comparing him to former Calgary Stampeders defensive end Cordarro Law. Law signed with the San Diego Chargers and made his NFL debut this year after recording 14 sacks with the Stampeders in 2013.

“(Sam) could star in the CFL,” Lande told Sean Keeler of Fox Sports Kansas City. “The reality is, in the CFL, a lot of their pass rushers are 250-pound, smallish guys who’ve got quick feet. (Sam) can run, he uses his hands well, he’s got a nose for the quarterback.”

Additionally, Sam may be getting an offer from Vince Neil (front man for Mötley Crüe) who owns the Las Vegas Outlaws franchise of the Arena Football League.