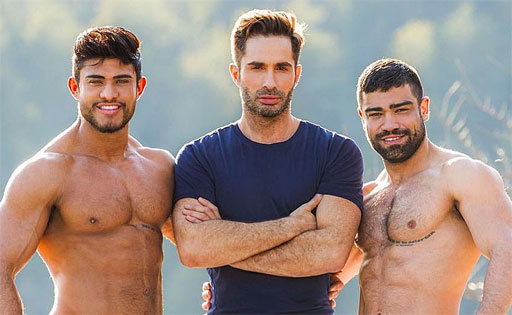 The New York Post gossip site reports that Lucas will retire from appearing in adult films in 2020 but continue to produce and direct.

“Successfully dominating the gay adult-film industry for 25 plus years and starring in over 300 films, Michael is planning to retire the devil between his legs in 2020 but still continue to direct and produce films,” he added.

View this post on Instagram
Having a great time filming a new production with Lucas Entertainment models in beautiful Puerto Vallarta, Mexico Thank you Vidal @mantamarbc for your hospitality, you most beautiful gay beach club I have ever been to! #lucasentertainment #lucasmen #lovemantamar #haveitall
A post shared by Michael Lucas 🇱🇷🇮🇱 (@michaellucasnyc) on May 11, 2018 at 9:30am PDT

Additionally, having penned essays for HuffPost and The Advocate in the past, Lucas has apparently set his sights on a larger literary endeavor – a tell-all book from his escorting days in the 1990s.

According to Page Six, Lucas plans “to publish a juicy autobiography that will include a steamy chapter about a few top Hollywood celebs who paid him to have sex with them when he was an escort in the late ’90s.”

The gossip page says that the A-list celebrity names will remain secret until the book’s release.

Shortly after the publication of the story at Page Six, Towleroad posted emails from Lucas to an editor at the New York Post adamantly denying he has any plans to ‘name names’ in an upcoming memoir.

Lucas states that he considers those relationships ’sacred’ and promised to ‘take those secrets to the grave.’

Here’s the email from Lucas to the New York Post via Towleroad:

The story that ran today and attributed to me by my former publicist is absolutely false. I spent 45 minutes on the phone explaining why I would never do that and they still felt the need to give it to you. Needless to say I am perplexed by their motivation and they were fired immediately.

I am considering legal action against them.

What is absolutely false is that I would ever write or consider writing a “ tell all” book and naming names of my clients.

I consider that relationship sacred and I would NEVER violate their confidence or my integrity. Period.

I have nothing but the greatest respect and gratitude for the people who trusted me with their most intimate secrets and I will take those secrets to the grave.

In follow-up correspondence, Lucas demands the online headline be corrected, sharing, “This is a major, major embarrassment for me.”

View this post on Instagram
Back to #barcelona for a new #lucasntertainment #production with 25 #sexy #lucasmen
A post shared by Michael Lucas 🇱🇷🇮🇱 (@michaellucasnyc) on Jul 4, 2017 at 7:19am PDT