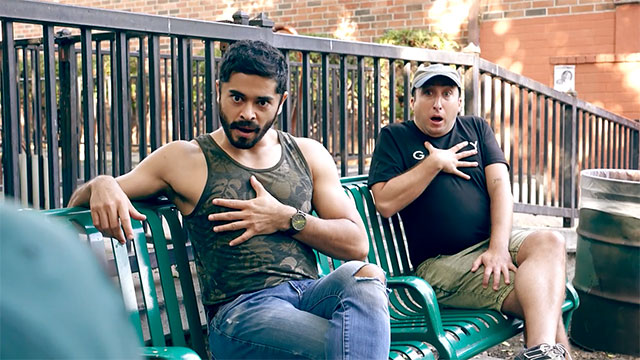 Which is worse – being called a ‘basic’ gay or being kicked out of bed for not voting?

I have to say Michael Henry’s latest video exploration into the world of the gays had me scratching my head a bit. I know I’ve heard of gays who don’t vote, but do they really exist?

In the video, Clint shares a recent story of a nooner gone bad after he casually mentioned he doesn’t vote, nor does he plan to. Shaken out of his afterglow by the revelation, Nathan throws Clint out of his apartment.

Needless to say, Clint’s indignation over being kicked to the curb falls on less than sympathetic ears as Michael and Chris are just as horrified by his lack of civic duty.

“Would you kick someone out of bed for not voting?” asks Clint with a – pardon the expression – straight face.

Chris and Michael in unison: “YES!”

The democratic duo then goes into all the reasons how not voting serves no purpose whatsoever.

Oh, and Clint also admits he won’t be going out this weekend because he partied so hard at Atlanta Pride he got gout. “What’s the big deal? It’s my right to have a good time in a dark warehouse. So what if it’s a ‘super spreader’ event at the public’s expense?”

In this day and age of Donald Trump packing the courts with ultra-conservative judges whose rulings can shape (or reduce) LGBTQ rights, kicking transgender soldiers out of the U.S. military and arguing at the Supreme Court it’s fine to fire someone for who they love, why would someone choose to not vote? I mean, not even fill out a mail-in ballot?

Michael Henry is, once again spot-on not only on the issue but with his timing as the election is only one week away. Watch the quick video below, then make sure you vote!

Note: For those concerned about coronavirus safety, Michael Henry shares, “Nathan and Clint are in a relationship and we filmed in their apartment.”