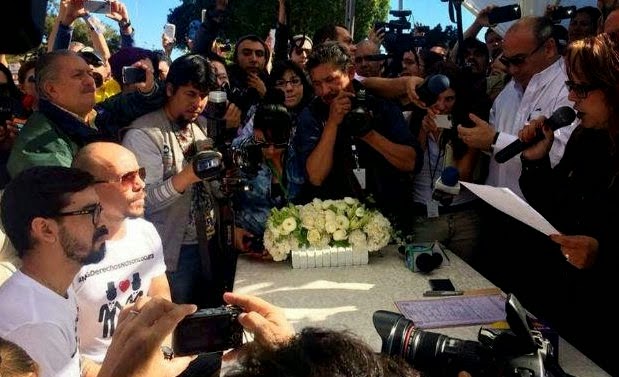 With cheers of “yes we could, yes we could” filling the air, Mexicali residents Victor Fernando Urias Amparo, 37, and Victor Manuel Aguirre Espinoza, 43, were finally able to exchange their wedding vows before an enthusiastic crowd of media and supporters outside Mexicali City Hall.

Three times before the couple had tried to marry at city hall after a court order from Mexico’s Supreme Court cleared the way last June. But time after time, bureaucratic blockades were placed in their way. The last attempt was halted after a volunteer leveled the accusation that the men “suffer from madness.”

The result was a social media campaign with the hashtag #MisDerechosNoSonLocura, or “my rights are not madness.”

However, it seem the fourth time is the charm sometimes.

On Saturday, the crowd of protesters began to gather about 9:30 a.m. at the government complex, and many in the crowd of about 500 snapped up T-shirts being sold for 50 pesos each that included the Twitter hashtag and a picture of two grooms.

The crowd marched around the plaza with a giant rainbow flag and listened to speeches.

At one point, the couple, their lawyer and a swarm of media went into City Hall. The couple and their lawyer met behind closed doors in the civil registry office, then went upstairs into the mayor’s office.

They emerged with smiles about 30 minutes later and announced the marriage was on.

The ceremony was performed under a canopy in front of City Hall, with the grooms seated on one side of a table and a gaggle of cameras surrounding them.

Their vows complete, the husbands exchanged kisses, and a bottle of Champagne was popped to cheers and applause.