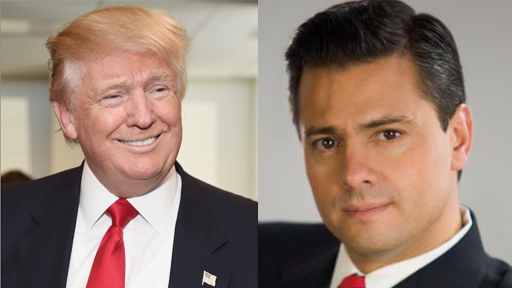 The tense relationship between Donald Trump and Mexican President Enrique Peña Nieto continues in “testy” territory as a tentative plan for Peña Nieto to visit the White House has been scrapped thanks to disagreement regarding Trump’s long-promised border wall.

Peña Nieto was eyeing an official trip to Washington this month or in March, but both countries agreed to call off the plan after Trump would not agree to publicly affirm Mexico’s position that it would not fund construction of a border wall that the Mexican people widely consider offensive, said the officials, who spoke on the condition of anonymity to discuss a confidential conversation.

Speaking by phone on Tuesday, Peña Nieto and Trump devoted a considerable portion of their roughly 50 minute conversation to the wall, and neither man would compromise his position.

One Mexican official said Trump “lost his temper.” But U.S. officials described him instead as being frustrated and exasperated, saying Trump believed it was unreasonable for Peña Nieto to expect him to back off his crowd-pleasing campaign promise of forcing Mexico to pay for the wall.

During a phone call in January 2017, Trump admitted to Peña Nieto that they both were “in a little bit of a bind” over the promised border wall.

“The fact is, we are both in a little bit of a political bind because I have to have Mexico pay for the wall,” Trump told Peña Nieto. “I have to. I have been talking about it for a two-year period. If you are going to say that Mexico is not going to pay for the wall, then I do not want to meet with you guys anymore because I cannot live with that.”