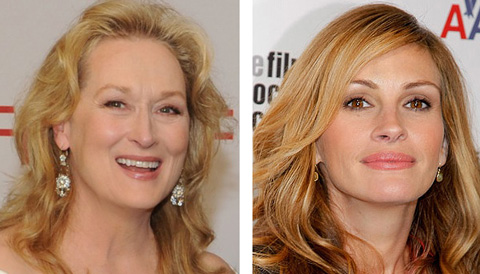 The Weinstein Company confirmed today that, after being in talks with the Oscar-winning actresses for over a year, Streep and Roberts will appear on-screen together for the first time for the adaptation of Tracy Letts’ Pulitzer and Tony-winning play “August: Osage County.”

Meryl Streep and Julia Roberts will play mother and daughter in the film, taking on the roles of pill-popping matriarch Violet and complicated, headstrong daughter Barbara, respectively. “After seeing Meryl Streep’s mesmerizing portrayal as Margaret Thatcher in The Iron Lady, it has me even more excited and proud to co-star with her,” Roberts said in a statement.

When the three-act “August: Osage County” opened on Broadway in 2007, the Midwestern family drama was heralded as a one of the greatest American plays thanks to its crackling dialogue and tour de force performances (Deanna Dunagan won a Tony as Violet and Amy Morton was nominated as Barbara).