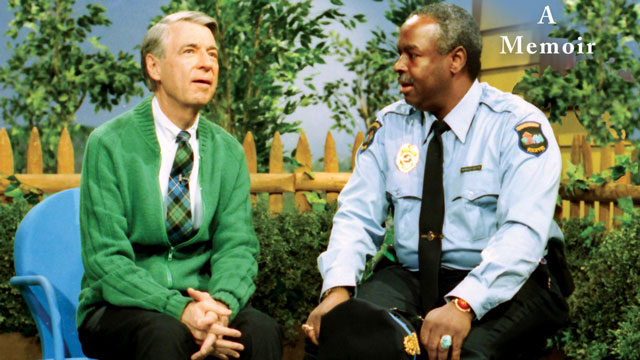 In his new memoir, Officer Clemmons, Francois Clemmons shares that during his time as a cast member of the iconic children’s TV show, Mr. Rogers Neighborhood, the show’s star Fred Rogers encouraged him to stay in the closet and to marry a woman.

In a new interview with PEOPLE, Clemmons says, “I forgive him. More than that, I understand.”

From 1968 to 1993, Clemmons became known to millions of children as ‘Officer Clemmons’ on the popular PBS series. Clemmons says he also came to see Rogers as “a mentor, father figure, and ultimately ‘the spiritual love of my life.'”

The two men met at Rogers’ wife’s church and became fast friends. Having survived a difficult childhood, the calming nature of Rogers and his ‘neighborhood’ became an integral part of Clemmons’ life.

But according to his new autobiography, Clemmons was summoned to Rogers’s office one day.

“Franc, you have talents and gifts that set you apart and above the crowd,” Rogers told Clemmons per his new memoir. “Someone has informed us that you were seen at the local gay bar downtown. Now, I want you to know, Franc, that if you’re gay, it doesn’t matter to me at all. Whatever you say and do is fine with me, but if you’re going to be on the show as an important member of the Neighborhood, you can’t be out as gay.”

Clemmons shares with PEOPLE he began to get emotional and broke down crying.

“I could have his friendship and fatherly love and relationship forever,” says Clemmons. “But I could have the job only if I stayed in the closet.”

He had given Clemmons inspiration and stardom but told him there was a cost.

“You must do this Francois because it threatens my dream,” Clemmons recalled Rogers saying.

“I was destroyed,” Clemmons shares in his book. “The man who was killing me had also saved me. He was my executioner and deliverer. But, at the same time, I knew that he would know how to comfort me. I didn’t have another mother or father to comfort me. I had no one to go and be a boy with. I was just vulnerable. He got in a few slaps, some tough love, a good spanking. But I was not kicked out of the family.”

Rogers reportedly assured Clemmons, “The world doesn’t really want to know who you’re sleeping with — especially if it’s a man. You can have it all if you can keep that part out of the limelight.”

But, it turns out, Rogers did have a plan.

“Have you ever thought of getting married?” Rogers asked Clemmons. “People do make some compromises in life.”

And that’s exactly what Clemmons did.

“By the time I left his office, I had made up my mind to marry La-Tanya Mae Sheridan,” wrote the 75-year-old. He was 23 at the time.

“At the wedding reception, Fred and Joanne approached me and my new wife,” adds Clemmons. “It felt as if Fred and I were sealing some kind of secret bargain.”

And in making that bargain, Clemmons became one of the first gay Black men on television although no one would know.

The marriage would only last six years until the couple amicably filed for divorce in 1974. It was then that Clemmons finally began living life as an openly gay man.

But today, Clemmons harbors no resentment for Rogers.

“Lord have mercy, yes, I forgive him,” Clemmons tells PEOPLE. “More than that, I understand. I relied on the fact that this was his dream. He had worked so hard for it. I knew Mister Rogers’ Neighborhood was his whole life.”

To be clear, I don’t hold any animus against Rogers, either.

It was a different time. It was a children’s show. As I’ve noted many times on The Randy Report, the only depiction of LGBTQ people back then were as murderous monsters or mentally ill. There was no spin that could deflect that in 1968.

That said, props to Fred Rogers for his inclusion of Clemmons. And not just as a member of his ‘Neighborhood,’ but as a police officer – a role Rogers insisted Clemmons play for a reason.

As a young black man from Ohio, Clemmons grew up afraid of the police.

“The idea that he wanted me to become one of them, one of the enemy, was a tremendous shock to me,” Clemmons told HuffPost in 2018. “Then, he painted it in a different light. He said, ‘You can become one of the helpers. That is something else that policemen do that we can emphasize.’”

And so, Clemmons became one of the earliest depictions of Black police officers that children could learn to trust.

In addition to his career in children’s TV, Clemmons was also an accomplished singer having received a Bachelor of Music degree from Oberlin College, and a Master of Fine Arts from Carnegie Mellon University. He won a 1976 Grammy Award for his performance as “Sportin’ Life” in a recording of Porgy & Bess with the Cleveland Orchestra.

Officer Clemmons is scheduled for release on May 5.

Clemmons was prominently featured in the acclaimed 2018 documentary about the children’s series, Won’t You Be My Neighbor?