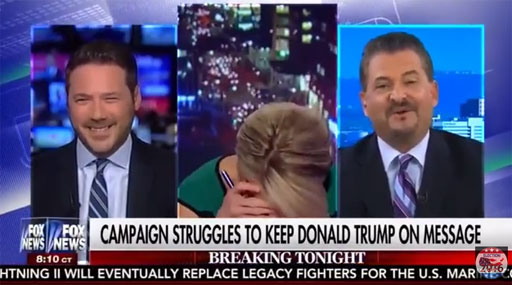 From mocking a disabled reporter, believing he saw folks celebrate the attack on 9/11, to even his feud with her, Kelly finds it all baffling.

Megyn Kelly really went off tonight after running a montage of all the past controversies he’s gotten himself into––including the one involving her––and giving the media more ammo with which to attack him.

She cried, “What is he doing relitigating every controversy from the primary season?!” Ben Domenech said the idea of the Trump campaign being in turmoil isn’t news because it’s kind of a constant.

Kelly also pointed out that, despite Trump bragging about it, ramps for the disabled are mandatory. Trump supporter David Wohl pointed out how expensive they are. Kelly literally buried her head in her hands and deadpanned, “Oh, good God.”