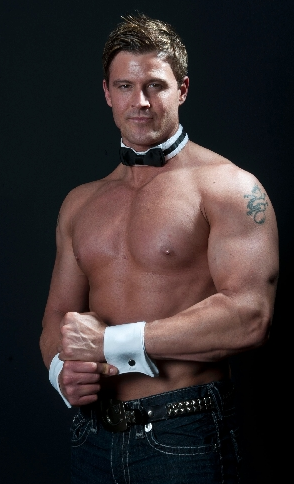 How about a little Q&A with uber-handsome Nathan Minor of The Chippendales?

Q: Were you a theatrical sort of kid?

A: I was Johnny Appleseed (in a school play) my fifth-grade year. That’s my claim to fame. And I was in choir, up until eighth grade.

Q: When did you decide to pursue a career in entertainment?

A: I don’t know, because I was a big football fan, too. I played football from Pee Wee, and that was one direction. I thought I was going to go to college and play ball. But I dislocated my knee a couple of times and I ended up in art school (on a scholarship).

Q: Did you finish?

A: The second year of art school, I was bored to death. … So I went to the president of the school and I asked him if we could put the scholarship on hold. He thought that was pretty funny. I ended up walking out without a scholarship and leaving school without talking to my family first.

Q: When did you join Chippendales?

A: They were doing something in New York and asked me to be a part of it in 2000 and 2001. … Then, after 9/11, the show basically shut down, and we went to Europe for the first three months and came to Vegas for a weekend, and we did real well at the Rio. … After that weekend, they made a deal and we moved here. So I’ve been here 10 years.

Q: Are Las Vegas audiences different than audiences elsewhere?
A: In Europe, for sure. The women in Europe are really critical about the (production) of the show. They really appreciate the show (production values) more than, I would say, American women, who are more aggressive.

Q: They’re not critiquing the lighting design?
A: Right (laughs). They (American women) want to know when you’re going to take it off and they want to know what’s coming off next.

Q: What does your wife think about your job? And please say you met her when she was in the audience during a show.
A: (Laughs) It was not in the show. She’s from Brazil, and she’s awesome, and she keeps me in line.

Q: She doesn’t get jealous?
A: Know what? If she does, she does a good job of hiding it.