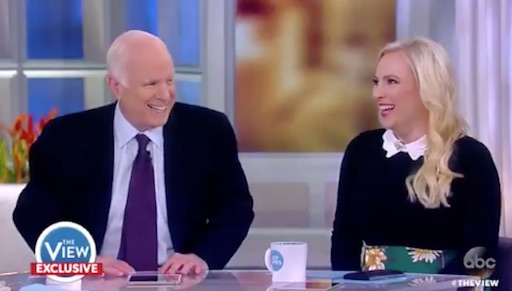 Appearing on The View today, where his daughter Meghan is a new co-host, Sen. John McCain was asked if he was “afraid” of retaliation from Donald Trump after some of McCain’s public statements about Trump.

McCain also took another veiled swipe at Trump’s “bone spur” deferments from the Vietnam War, as well as Trump’s attacks on Gold Star families and accusations that Barack Obama was not born an American.

Watch the clips below.

McCain is asked if he’s afraid of Trump. He laughs for about 15 straight second. pic.twitter.com/u7NYkkBGHf

McCain: “We should not be fighting about a brave American who lost his life serving his country.” pic.twitter.com/2lLz6jHrny

McCain on people questioning Obama’s religion, birthplace: “You can’t let that go. You just got to do what’s right.” pic.twitter.com/98OylIWG3W