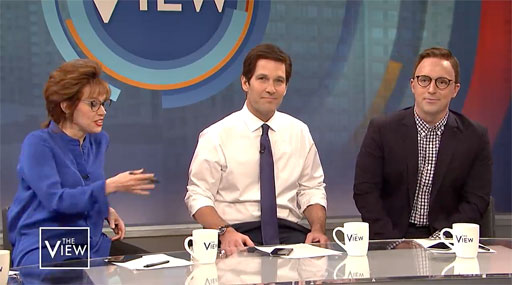 In what is demonstrably a show of his impact so far on the presidential race, Democratic hopeful Mayor Pete Buttigieg, played by Saturday Night Live host Paul Rudd, made his first SNL appearance on last night’s season finale, as a guest on The View.

Leslie Jones’s Whoopi Goldberg welcomes Mayor Pete saying, “I heard when you grow up, you want to be president.”

“Well, I am grown up,” Mayor Pete tells the gaggle of daily talkers. “I may only be 37 years old, but I do feel like I represent everyday Americans. I’m just a Harvard-educated, multilingual, war veteran, Rhodes scholar. I’m just like you.”

Asked about being the first openly gay man who’s a serious contender for the White House, Pete responds, “I do want to say that I wouldn’t be running for president if I didn’t believe America was ready to accept not only a gay man but a boring gay man in the public eye.”

Before the sketch draws to a close, Beck Bennett offers his take as Chasten Buttigieg, our first possible First Gentleman: “Wow, this is all so new to me,” he says. “Usually I’m just home with the dogs.”

But in the end, the ladies all seem to have eyes for only one presidential candidate, leaving the Buttigieg men a little confounded.