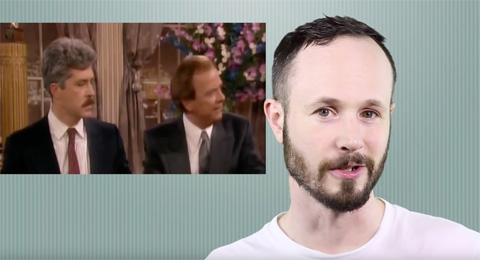 In a very worthwhile 7 minute history of the portrayal of gays on sitcoms in the 1970s and 1980s, Matt Baume tracks how gays slowly gained visibility (and a voice) on TV.

When did TV first permit joking while gay? I’ve been combing through sitcoms to figure out when queers stopped being a scary threat, and were allowed to be real people with love lives and funny punch lines. Here are just a few of my favorite early gay characters on sitcoms.

As Baume states at the end, a 7 minute video can’t provide enough time to cover all the good and bad of the gay 70s and 80s. I am a bit surprised he skipped over Showtime’s Brothers which featured an openly gay lead character that was memorably positive.

But, again, how much can you fit into a web video?