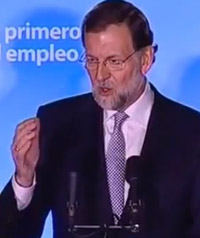 Progressive Spaniards fear for what will happen to marriage equality and other laws under new Prime Minister-elect Mariano Rajoy’s conservative government.

His conservative party has challenged in the Constitutional Court a 2005 law allowing gay marriage. Rajoy has said he supports civil unions for homosexual couples but does not think they should be called marriages.

In Campillo de Ranas, a tiny hamlet in the Ocejon valley 80 miles north of Madrid, there are very real fears of what the future may bring under the new conservative government of Mr Rajoy, 56.

The picturesque village has carved out a reputation for holding the record in Spain for the number of gay weddings since the Socialists legalised same-sex marriages in 2005.

The socialist mayor Francisco Morato has reversed the fortunes of the once-dying community by welcoming gay marriages and bringing a much-needed boost to the local economy, but he now fears the good times are over.
“I get the feeling that there is a lot of concern,” said Mr Morato. “I have been holding marriages every weekend – sometimes as many as three weddings in one day – I simply haven’t stopped.”

“A lot of people tell me they fear that Mariano Rajoy will revoke the law, so there has been a rush to go ahead with their weddings before it is too late,” he said.
Some 20,000 gay couples have wed since the law, which also lets gay couples adopt children, made Spain only the third member of the European Union after Belgium and the Netherlands to allow same-sex weddings.

More at the Telegraph.co.uk