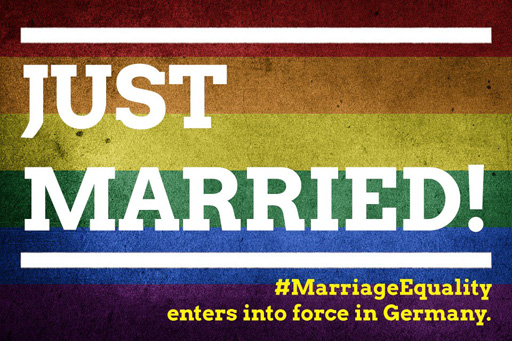 Marriage ceremonies between same-sex couples began today in Germany after a June vote of 393-226 in Parliament legalized same-sex marriage.

Cheers rang out in the City Hall of Berlin’s Schöneberg district on Sunday as two men, who met 38 years ago, when the German capital was a divided city, became the country’s first same-sex couple to legally marry.

The couple, Bodo Mende, 60, and Karl Kreile, 59, were wed in a civil ceremony, surrounded by a crush of photographers and television cameras eager to capture the historic moment.

“This is an emotional moment with great symbolism,” Mr. Kreile told reporters before the event. “The transition to the term ‘marriage’ shows that the German state recognizes us as real equals.”

Across the country, city halls that are normally closed on the weekend opened their doors to allow marriages on the first day the law took effect. Dozens of couples were expected to exchange vows in Berlin, as well as in Cologne, Hamburg, Hanover and Kiel on Sunday and the days beyond.

Among those exchanging vows on Sunday was Volker Beck, a member of the Greens party and a former lawmaker who fought for decades for marriage equality.

Months after he was showered with confetti on the floor of Parliament as the law passed, he celebrated his marriage to Adrian Petkov under shiny gold balloons spelling out “Love.”