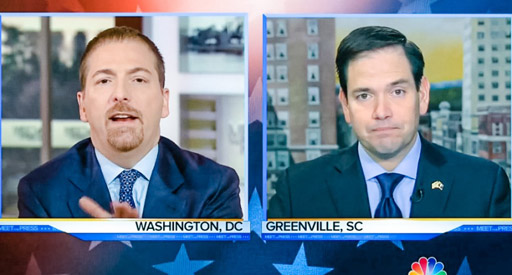 Sen. Marco Rubio took to just about every Sunday morning show he could find to say President Obama should not appoint a replacement for the late Antonin Scalia because Obama has only a “few months” left in his presidency.

On Meet the Press, Rubio again insisted that there should be no nominations from a “president nearing the last few months of his administration.”

“Do presidential terms end after three years?” NBC host Chuck Todd shot back at the candidate.

“There comes a point in the last year of the president, especially in their second term, where you stop nominating,” Rubio said. “You basically say, at this point, with a few months left in your term, no accountability from the ballot box on the appointment you’re going to make — on a lifetime appointment.”

Republicans keep saying there’s an 80 year precedent of not confirming justices in a president’s last year, which is false. Justice Anthony Kennedy was confirmed in February of President Reagan’s final year in office.