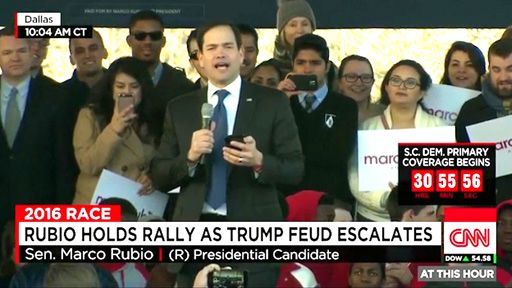 In the aftermath of last night’s Republican debate where Sen. Marco Rubio attacked front-runner Donald Trump over and over again, Rubio continued the assault on the campaign trail touching on every possible insult he could find from the Donald touching up his makeup at the debate to several misspelled tweets today.

“He had this little makeup thing applying, like makeup around his mustache, because he had one of those sweat mustaches. He wanted a full-length mirror. Maybe to make sure his pants weren’t wet. I don’t know.”

“‘Wow every poll said I won the debate last night.’ Now this is him about himself, okay — ‘Great honer.’ I think he meant to say honor. I don’t know how he got that wrong because the e and the o are nowhere near each other on the keyboard.”

“How does this guy in not one tweet but three tweets misspell words so badly? I only reach two conclusions. Number one, that’s how they spell those words at the Wharton School of Business where he went. Or number two, just like Trump Tower, he must have hired a foreign worker to do his own tweets.”

“You all have friends thinking about voting for Donald Trump. Friends do not let friends vote for con artists.”

It was practically a Don Rickles routine.

Clearly the GOP establishment leaned on Rubio to do SOMETHING to slow Trump’s assent to nominee. But is it too late? 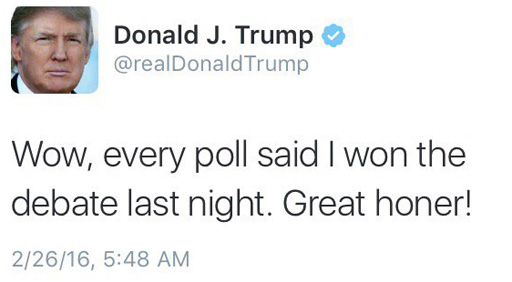