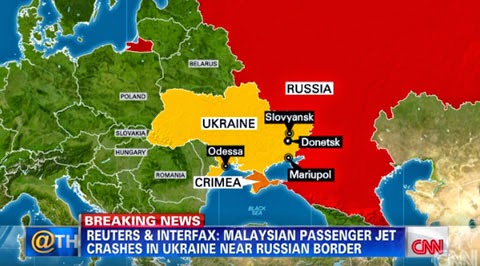 All major news sources are reporting a Malaysia Airlines flight, traveling from Amsterdam to Kuala Lumpur, has crashed in eastern Ukraine:

Malaysia Airlines confirmed that it lost contact with Flight 17 and that the plane’s last known position was over Ukrainian airspace, the airline said on Twitter.

The aircraft was “shot down” over Ukraine by “terrorists” operating a Buk surface-to-air missile system, according to the Facebook page of Anton Gerashchenko, adviser to the Ukrainian Interior Ministry. There were 280 passengers killed as well as 15 crew members, Gerashchenko’s post reads.

“We do not exclude that the plane was shot down and confirm that the Ukraine Armed Forces did not fire at any targets in the sky,” Ukrainian President Petro Poroshenko said, according to his website.