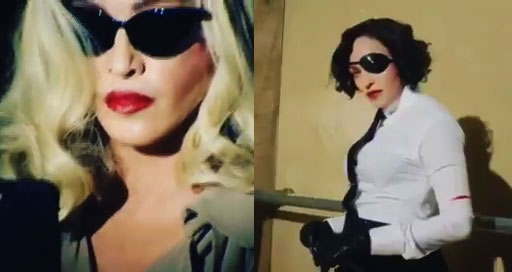 Madonna thrilled her fans this weekend as she teased the title and feel for her next album with a mysterious, stylized video clip.

In the video posted to her social media, Madge shares the news at a table of friends, “I’ve decided to call my record Madame X.”

As various characters or alter egos in elaborate costumes appear on the screen, we hear Madge say, “Madame X is a secret agent traveling around the world, changing identities, fighting for freedom, bringing light to dark places.”

She goes on to rattle off a list of identities that the enigmatic secret agent embodies.

“She is a dancer, a professor, a head of state, a housekeeper, an equestrian, a prisoner, a student, a mother, a child, a teacher, a nun, a singer, a saint, a whore, and a spy – in the house of love.”

The video also features Madonna singing a new song, a piano-driven piece with the lyrics, “The thing that hurts the most / is that I wasn’t lost.”

The 60-year-old pop star followed up the announcement with a couple of quick clips of the mysterious ’Madame X.’

Madame ❌ is a spy in the house of Love ♥️ pic.twitter.com/8DE5SF6uyR

What song is Madame ❌ playing…………… pic.twitter.com/257fxOHwyN

For several weeks now, the queen of pop has posted various hints on her Twitter and Instagram accounts about the new project which now come into clearer focus.

No street date announced yet, but with this announcement we’re guessing the first single could come soon.