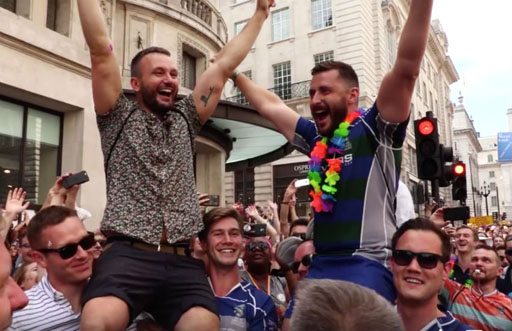 A very sweet moment from this past weekend’s Pride Parade in London as rugby player Fernando Ferreira proposed to his boyfriend Greg Woodford.

The London-based Kings Cross Steelers are a regular fixture in the parade every year since it was founded in 1995.

But during a mock line-out, Fernando Ferreira got up and walked over to the barricade where his boyfriend, Greg Woodford, was standing.

What happens next will melt your heart.

Ferreira gets down on one knee, as his rugby mates cheer in the background.

This was the second marriage proposal at the London Pride parade this weekend.

Along the parade route, a woman holding a rainbow flag approached her girlfriend, who happened to be a transport police officer working the parade.

While she was clearly surprised she says yes immediately.