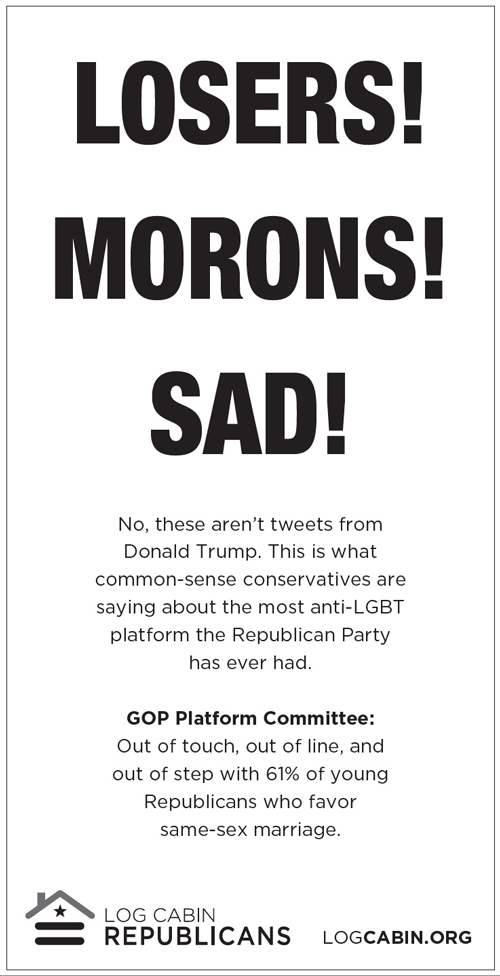 As hard as they try, the gay men and women of Log Cabin Republicans remind me of the Peanuts cartoons where “Lucy” fools “Charlie Brown” over and over again by yanking the football away before he can kick the ball.

Year after year LCR hope to get to be part of the Republican party. To be respected. And every year, the GOP shows disdain for the LGBT community.

The self-loathing is painful to watch.

This year, in the wake of the most anti-LGBT platform ever,  LCR has run a full page ad in the Cleveland edition of USA Today denouncing the virulently anti-LGBT positions taken this election year.

Log Cabin Republicans has placed a full-page ad in USA Today calling out the GOP Platform Committee for drafting the most anti-LGBT platform in the Republican Party’s 162-year history. The ad runs today in the Cleveland edition of the largest newspaper in the United States and will be available in most every hotel speakers, Delegates, and credentialed guests will be staying at during the Republican National Convention.

“Response from allies to our reaction in the wake of the drafting of this vitriolic anti-LGBT platform has been nothing short of staggering,” Log Cabin Republicans President Gregory T. Angelo stated. “The email sent to our members last week propelled Log Cabin Republicans to the top trend on Facebook for more than two days, and now holds the record as the highest-grossing single fundraising appeal this organization has ever sent. But this was fundraising with a purpose—I’m pleased to share that every last cent donated to Log Cabin Republicans via last week’s email has been spent on this project. This unprecedented support is representative of the GOP I know, and this is the GOP our members want to see.”

The provocative advertisement reads, “LOSERS! MORONS! SAD! No, these aren’t tweets from Donald Trump. This is what common-sense conservatives are saying about the most anti-LGBT platform the Republican Party has ever had. GOP Platform Committee: Out of touch, out of line, and out of step with 61% of young Republicans who favor same-sex marriage.”

“It’s my hope this advertisement will be a wake-up call to the intransigent and ancient voices on the GOP Platform Committee that marriage equality is the law of the land, gay families are a part of the fabric of America, and LGBT Republicans have an important role to play in growing the Party,” Angelo concluded.