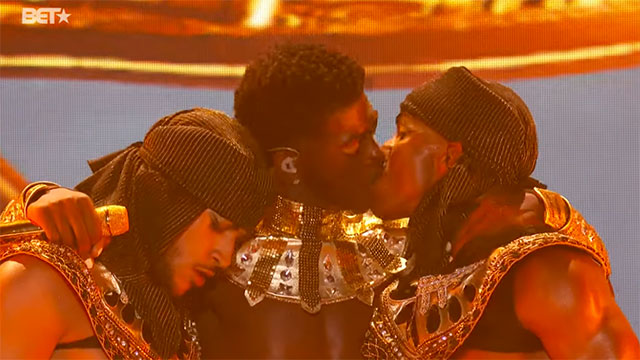 When Madonna shared a same-sex smooch with Britney Spears and Christina Aguilera at the 2003 MTV Video Music Awards, it was a sensation, but when openly gay pop singer Adam Lambert enjoyed a similar moment with a male band member at the 2009 American Music Awards, it caused a backlash that nearly derailed his career.

That societal progress was evident Sunday — during the final weekend of Pride Month — at the BET Awards, when Lil Nas X ended his fiery performance of the homoerotic hit “Montero (Call Me by Your Name)” by passionately kissing one of his male backup dancers. In 2021, this move was met not with scorn but with delight, as Nas’s fearlessness was widely celebrated on social media.

Also – during her acceptance speech for the night’s Lifetime Achievement Award, Queen Latifah gave a shout-out to the LGBTQ+ community and her long-rumored girlfriend Eboni Nichols.

“I’m gonna get off this stage, but I thank you so much for all of you, the fans, for supporting every crazy-ass thing I’ve done through the years,” said the rapper and actress. “And thank you for making Equalizer number 1. Eboni, my love. Rebel, my love. Peace. Happy Pride!”

Lil Nas X is the black gay popstar I needed to see as a kid. The fearlessness it takes to be so decidedly queer in front of a notoriously homophobic audience. I needed that. pic.twitter.com/Y7n4ZGDGEM

Still not over Lil Nas X being unapologetically queer on the BET Awards last night! 🌟 pic.twitter.com/sUDVdJRYMu

Billboard ranks Lil Nas X's “MONTERO (Call Me By Your Name)” as the best performance at the 2021 BET Awards. pic.twitter.com/dN3eRpWBKo