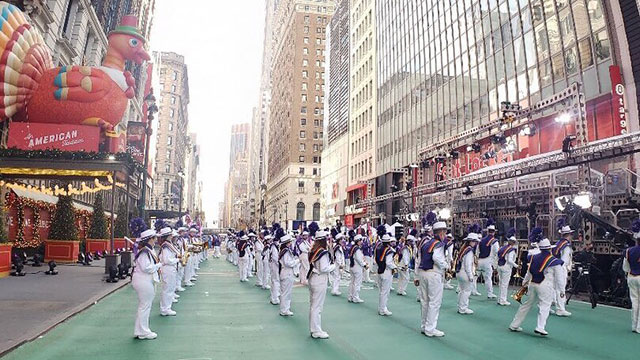 The Lesbian & Gay Big Apple Corps is one of the first queer marching bands in the United States, founded in 1979 in New York City.

This year, the Big Apple Corps became the first openly LGBTQ group to perform in the Macy’s Thanksgiving Day Parade.

The band had to get creative in order to rehearse safely and legally this fall. Practicing indoors was out of the question, so its usual space in a Manhattan parish center would have to be traded for something without walls.

The band needed daylight, so rehearsals would be limited to weekends. New York did not allow gatherings of more than 50 people, but more than 80 musicians and color-guard members and confetti-cannon shooters needed to practice, so organizers began to investigate their options in New Jersey. They soon settled on a parking lot in the Newark suburbs, between a soccer stadium and a PATH station.

For six sunny Saturdays in October and November, the members of the Big Apple Corps spaced themselves eight feet apart along the yellow lines of the parking spaces, covered the ends of their instruments with plastic, and played.

Many on the Twitterverse noted the inclusion of an LGBTQ marching band wishing they’d seen such representation when they were in their marching band days.

Congrats to everyone on the achievement!

You can watch a bit of the Big Apple Corps’ Thanksgiving Day performance of the ABBA hit ‘Dancing Queen’ below.

.@LGBAC playing ABBA’s hit “Dancing Queen” & having the time of their lives at the #MacysParade ❤️️🧡💛💚💙💜 pic.twitter.com/TTXTW3tp11

Thank you @Macys for this incredible experience! https://t.co/uQB8GXS34r

I genuinely, wholly, unironically adore that New York City has its own big gay marching band. It is perfect.