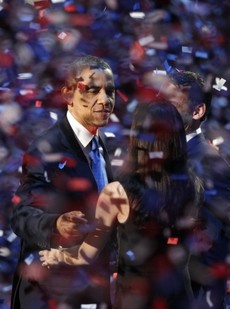 Prior to the election, Gallup predicted that LGBT voters, overwhelmingly pro-Obama, had the potential to tip the election decisively in the president’s favor.  A new analysis of election data appears to validate that theory.

Mr. Obama’s more than three-to-one edge in exit polls among the 5 percent of voters who identified as gay, lesbian or bisexual was more than enough to give him the ultimate advantage, according to the study, by Gary J. Gates of the Williams Institute at the U.C.L.A. School of Law, in conjunction with Gallup. The results are consistent with earlier research on the size and political beliefs of gay voters.
…
As with Latinos and Asian-Americans, the number of voters who identify as gay appears to be growing. Only 1.9 percent of Americans over 65 identify as gay, lesbian or bisexual, according to the Gallup survey, while 3.2 percent of those between 30 and 49 and 6.4 percent of those between 18 and 29 do.