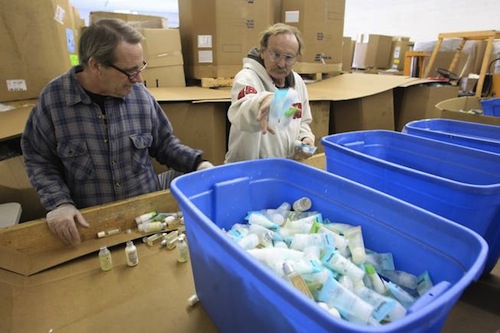 A number of Strip resorts have partnered with the nonprofit group Clean the World to collect partially used hotel room toiletries and recycle them for use by people in need in the United States and abroad.

Recycled soaps and shampoos have been sent to Las Vegas homes for pregnant teens, homeless shelters in New York City, Houston and Chicago and impoverished villages overseas. They have helped hundreds of thousands of Haitians struggling in the aftermath of the 2010 earthquake and, more recently, scores of Filipinos left homeless by typhoons and flooding.

The program works like this: Housekeepers gather used soaps, shampoos and body washes and drop them off at central collection bins set up at each property. Once the bins are filled, a Clean the World driver picks them up and delivers them to a recycling center on South Valley View Boulevard.

At the recycling plant, staff and volunteers take potato peelers to the tiny bars of soap and scrape them to remove dirt, hair and other debris. The bars are doused with a bleach-and-water mixture, then cooked at 280 degrees for two minutes to kill any bacteria. They are sent through the equivalent of a giant meat grinder to chop them up into small granules, then pass through a press and cutter. The result is sanitized soap.

Las Vegas is Clean the World’s Western distribution hub, an unsurprising fact given the city is the hotel capital of the world and home to about 150,000 hotel rooms.

“We take so much for granted here in America,” said Bob McAbee, the group’s Las Vegas facility manager. “Many people have $1 and have to choose whether to eat or bathe. It’s a tough choice to make. We want to eliminate that choice.”

Five million people, mostly women and children, die every year because of improper hygiene, according to Clean the World. Simple hand washing with soap can reduce that number by millions since it helps prevent diarrheal diseases and acute respiratory infection, two of the top killers.

Since it was founded in 2009, Clean the World has distributed almost 11 million bars of soap to people in more than 45 countries. The effort also has kept 1.2 million pounds of trash out of landfills.