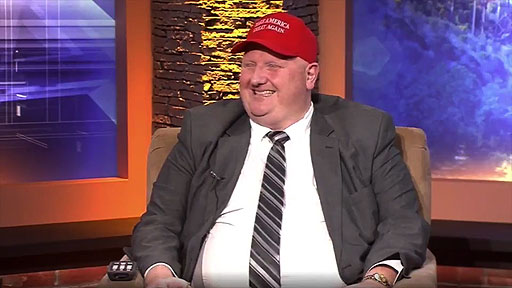 Continuing his attacks on the LGBTQ community, a West Virginia lawmaker suggested he would drown his own children if he found out they were gay.

West Virginia delegate Eric Porterfield sat down with local NBC affiliate WVVA to discuss his homophobic comments made last week where he called the LGBTQ Community “a modern day version of the Klux Klan.”

WVVA’s Rachel Anderson asked Porterfield what he would do if his “adorable daughter” or “precious son” came out to him as gay?

Proudly wearing a red MAGA hat, the first term lawmaker replied, with a wide smile, “Well, I would dress my daughter first, as I would take her for a pedicure, I’d take her to get her nails done, and see if she could swim.”

“If it was my son, I would probably take him hunting, I would take him fishing, then I’d see if he could swim,” he added, again flashing a chilling smile.

After a pause, Anderson asked Porterfield to clarify what he meant by “see if they could swim?”

“I just want to make sure they could swim,” he reiterated and then again beamed with a smile.

Anderson, clearly flustered, asked one more time, “What do you mean?”

“That’s just it – I’d take them out to do activities,” said Porterfield.

What would Del. Porterfield do if his son thinks he’s gay or if his daughter thinks she’s a lesbian? He would “see if they can swim.” It’s disturbing how quickly the WVVA reporter moves on. pic.twitter.com/ESb3EswfZz

Porterfield found himself in the national spotlight last Wednesday when he vociferously advocated for an amendment to a bill that would have prohibited local towns and cities from passing their own anti-discrimination laws for LGBTQ people.

West Virginia has no statewide protections for LGBTQ citizens.

“The LGBT is the most socialist group in this country,” he said. “They do not protect gays. There are many gays they persecute if they do not line up with their social ideology.”

He also used the word “faggot” during the debate while referencing the speaking tour of controversial homocon, Milo Yiannopoulos.

Speaking to The New York Daily News on Monday, Porterfield adamantly stood by his comments, saying, “I stand by my statements; I double down on my statements.”

“They’re the closest thing to political terrorism in this country,” he said of the LGBTQ community. “If you don’t agree with them or give them their way, they’ll intimidate you, threaten you and bully you. They want people’s freedom to be restricted.”

WVVA reports West Virginia’s GOP Chairwoman Melody Potter has issued a statement denounced his comments, describing them as “hateful, hurtful, and do not reflect the values of our country.”

“As West Virginians, we are taught to respect one another, love our neighbors, and when we disagree to seek understanding of our fellow Mountaineers.

In recent days, Delegate Eric Porterfield has made comments that are hateful, hurtful, and do not reflect the values of our country, our state, and the Republican Party.

These comments are unacceptable and we denounce them. They have no place in America.

We may disagree on policy, politics, and the direction of our state, but we can disagree civilly and respectfully because intolerant and hateful views hold us back, divide us, and hurt our state.”