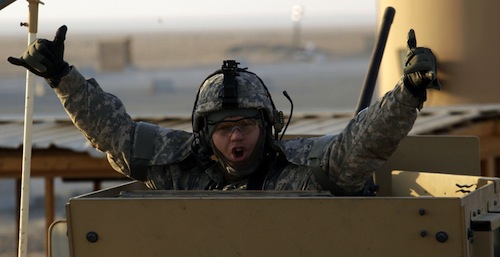 The last U.S. soldiers rolled out of Iraq across the border to neighboring Kuwait at daybreak Sunday, whooping, fist bumping and hugging each other in a burst of joy and relief.

The mission cost nearly 4,500 American and well more than 100,000 Iraqi lives and $800 billion from the U.S. Treasury. The question of whether it was worth it all is yet unanswered.

The low-key exit stood in sharp contrast to the high octane start of the war, which began before dawn on March 20, 2003, with an airstrike in southern Baghdad where Saddam was believed to be hiding.

The Iraq Body Count website says more than 100,000 Iraqis have been killed since the U.S. invasion. The vast majority were civilians.

The U.S. plans to keep a robust diplomatic presence in Iraq, foster a deep and lasting relationship with the nation and maintain a strong military force in the region.