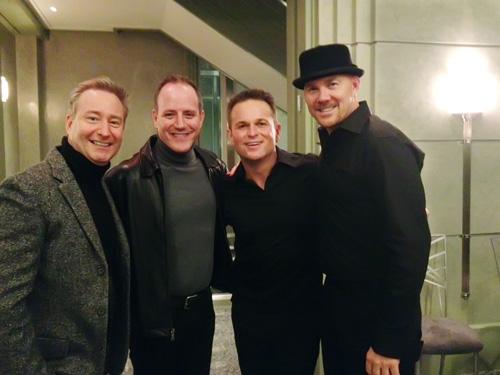 Michael and I had a fab time last night at The Smith Center’s Cabaret Jazz presenting the incomparable Sam Harris.

At this point, Sam’s career is so long and varied it’s difficult to pin point from where audiences know his work: as the very first Star Search winner in 1983; as the Broadway actor in THE PRODUCERS, GREASE, and THE LIFE (Tony nomination); TV and film actor (“The Class,” “Rules of Engagement”); or TV producer and writer (4 seasons of “Down To Earth” on TBS).

I’ve always admired his passionate and powerful singing having watched that premiere season of Star Search and seeing him on Broadway. The power and range that I’ve always associated with Harris was on full display last night, but masterfully moderated by artful choices.

Widely known for his power and range, I wasn’t prepared for how “moment to moment” Harris was throughout the entire evening’s songs.   Or how hysterically funny he was.

While the comedic level was high, it was matched by Harris’ effortless yet masterful singing.

Vocal highlights included “I Can’t Make You Love Me,” “You’ve Got To Use What You’ve Got,” a touching  “Cockeyed Optimist” combined with “Bridge Over Troubled Waters” and of course, Harris’ signature song “Over The Rainbow.”

I also appreciated the specific yet spare way Harris used the stage.  He made simple but clear choices when to stand still, when to move and where to move to.  Never obvious, but clearly thoughtful.  Props to the sound and lighting at Cabaret Jazz for framing the show with excellent technical support.

His partner in crime, Todd Schroeder, was more than a music director; Schroeder was every bit a collaborator.  His arrangements were top notch, as was his playing.  But his chemistry with Harris – they’ve worked together for 20 years – was a magic ingredient all evening long.

Harris has a Christmas CD – ON THIS NIGHT – for those of you looking for new tunes for the upcoming holiday season.  I would also recommend his CD titled ALWAYS.  Many of the songs from last night came from the album and I find it to be a great representation of where Harris is “at” musically these days.

Look for Sam Harris’ book to be released soon and if he comes to a performing arts center, run buy those tickets.  A great time is waiting for you.  Thanks to The Smith Center for bringing first class entertainment to Las Vegas.

More info about Sam can be found at www.samharris.com