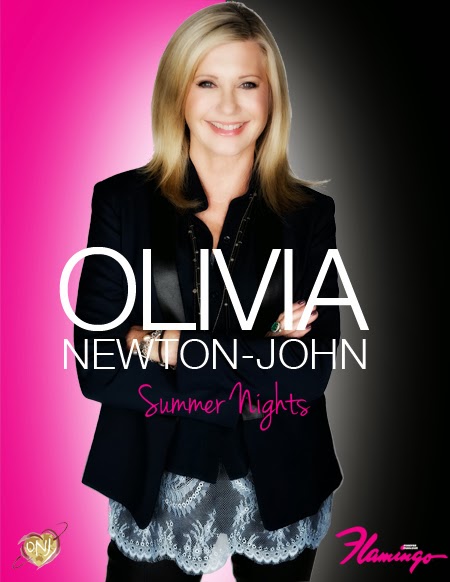 This morning on The Today Show, Olivia Newton-John announced a nine week concert residency at the Flamingo Las  Vegas to begin April 8th.

Get ready for some summer lovin’ and “have a blast” as Olivia Newton-John makes her way to Flamingo Las Vegas
with her “Summer Nights” residency. Opening inside the Donny &
Marie Showroom on Tuesday, April 8, the beloved internationally-renowned
singer-actress will take audiences on a musical journey through her
life in film and music.

“I am thrilled to be able to call Las Vegas home for a while,” says
Olivia. “I have performed here many times through the years and have had
nothing but wonderful memories and I look forward to even more fun at
the Flamingo. I am especially thrilled that a portion of every ticket
sold will benefit the Olivia Newton-John Cancer and Wellness Centre.”

“We look forward to welcoming Olivia to Flamingo Las Vegas, where so
many other iconic artists have performed,” said Eileen Moore, regional
president of the famed center Strip resort. “She has such a broad appeal
and you can count all of us here at Flamingo among her adoring fan
base; she’s the ‘one that we want’ and we can’t wait for her to call
Flamingo home.”

The production, featuring an eight-piece band, will take fans on a
journey through the celebrated singer, actress, songwriter and
philanthropist’s life and career. With more than 100 million albums
sold, Olivia’s successes include four Grammys, numerous Country Music,
American Music, Billboard and People’s Choice Awards, an Emmy Award, ten
#1 hits and more than 15 top 10 singles. She is also proud to be the
recipient of the Order of Australia honor and was bestowed the Order of
the British Empire by the Queen. In 1978, her co-starring role with John
Travolta in Grease catapulted Olivia into super-stardom and to date remains the most successful movie musical of all time. Commemorating its 35th anniversary last year, Grease is sure to play a significant role in Olivia’s new show “Summer Nights.”

The show will be a musical journey through the iconic artist’s
illustrious career featuring hits from her early years including “Have
You Never Been Mellow,” “Let Me Be There,” “If You Love Me Let Me Know”
and “I Honestly Love You,” as well some of her favorites from Grease, “Hopelessly
Devoted to You,” “You’re The One That I Want,” and of course, “Summer
Nights.”  Favorites and hits from her other movies, including Xanadu, as well as her ‘80s anthem and record breaking song “Physical,” will keep the room dancing, while new songs from her recent Billboard hit album Grace and Gratitude are sure to warm the hearts of the entire audience.