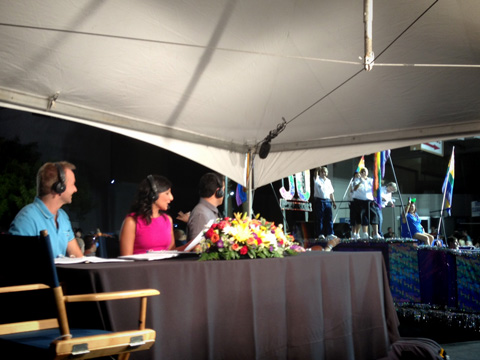 After so many years of attending the Las Vegas Pride Night Parade, it was uber-cool to be a part of it as I co-hosted the TV broadcast of the parade with Las Vegas’ favorite news anchors & hosts Chris Saldana and Dayna Roselli. The two veterans made life easy for me in my TV hosting debut as I got to be in the middle of the excitement.

With over 80 participating groups in the parade, I was wondering if we’d get it done in the 2 hour telecast. But the parade organizers AND Cox Cable kept the whole shindig on track. Talk about a well-oiled machine. The streets were packed in downtown Las Vegas, the weather (which in the afternoon was pretty scary) turned out perfect, and a great time was had by all.

Cox Cable is an amazing LGBT ally throughout the year. Consider this parade telecast alone: Cox Cable brings the parade LIVE to Cox customers and streams the show live on Cox96.net at no cost to Pride organizers or to the community. And they re-air the telecast 10 times throughout the month of September on Cox channel 96 – or channel 1096 for HD. You can check the schedule to at Cox96.net.

My hubby Michael was there the whole time taking some pics, so here’s a few.