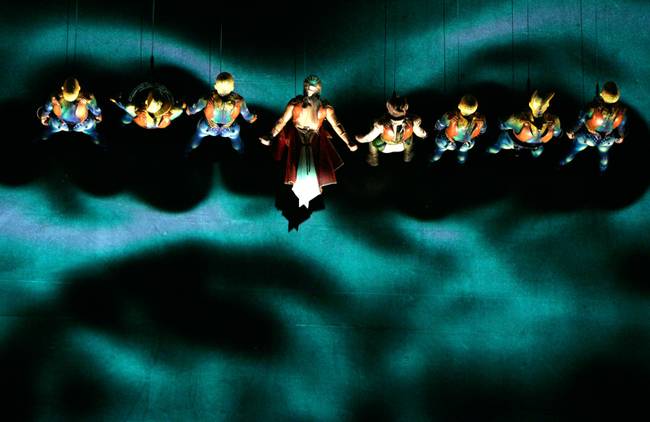 A terrible tragedy has occurred at one of Cirque du Soleil’s premiere productions in Las Vegas.

A performer in the show KA accidentally fell over 50 feet to her death.

From the Las Vegas Sun:

According to reports from audience members, the incident occurred Saturday night during the latter stages of the production at MGM Grand. Guyard-Guillot was one of the artists suspended by a wire from the show’s vertical stage in the show-closing Final Battle scene. As she ascended to the top of the stage, she slipped free of her safety wire and dropped to the open, unseen pit below the performers.

After the incident, one eyewitness seated in the middle of the audience and just a few rows from the lip of the stage said Guyard-Guillot dropped from the left side of the set (or on the right side, as audience members face the production) over a distance of at least 50 feet. The show momentarily continued, but then the music halted, and the performer’s screams and groans could be heard from below the stage. One source close to the production said she died on the way to a hospital.

“(The artist) was being hoisted up the side of the stage and then just plummeted down,” said Dan Mosqueda, visiting with his wife and 10-year-old son from Colorado Springs, Colo. “Initially, a lot of people in the audience thought it was part of the choreographed fight. But you could hear screaming, then groaning, and we could hear a female artist crying from the stage.” Mosqueda’s wife, Annie, has a background in theater and tweeted about the incident soon after it occurred.

Minutes after the artist’s fall, a recorded announcement was played on the theater’s sound system informing ticket-buyers that refunds or vouchers to future shows would be offered to those in the audience, and the crowd was dismissed.

Cirque released a statement this early afternoon: “The entire Cirque du Soleil family is deeply saddened by the accidental death of Sarah (Sassoon) Guyard, artist on the production ‘Ka,’ that happened on Saturday, June 29, in Las Vegas. The artist’s immediate family has been informed of the accident. Our thoughts are with her family and the entire Cirque du Soleil family.”

It is the first reported death from an accident onstage in Cirque’s 30-year history.

My sincerest condolences to the family of Guyard-Guillot and to the cast of KA.