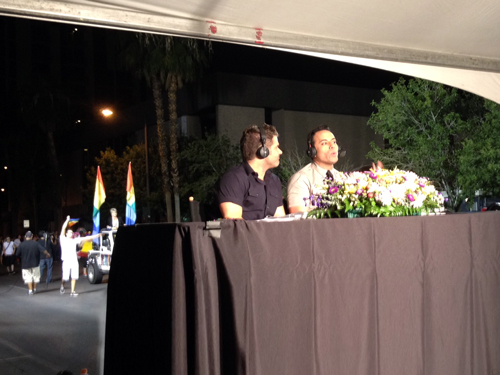 Had a great time at the Las Vegas 2012 Pride Parade last night.

Started out the evening watching LGBT idols/allies Kathy Griffin, Joan Rivers and Margaret Cho make an appearance TOGETHER to officially start the parade. Since all three also love hunky men, they took pics with two of the world famous Chippendales.

Then headed down to watch the parade from the telecast booth mid-parade. For several years, Cox Cable has generously broadcast the parade on their channel 96. If you missed the parade, it will be available online at www.cox96.net. Or catch one of many rebroadcasts on Cox Channel 96 in Las Vegas at 8pm on September 17, 20, 23, 30 and October 4 or 6.

And what’s Pride without friends? Our ‘partners in crime’ Gordon & Alex joined us for the festivities.

Off today for the Pride Festival. Great day in Vegas – get your Pride on!