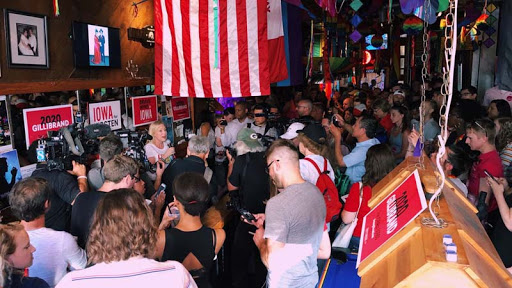 Democratic presidential candidate Sen. Kirsten Gillibrand (N.Y.) served drinks at a gay bar in Des Moines on Friday to kick off Pride Month celebrations in Iowa’s capital city this weekend. The 2020 hopeful was behind the bar at The Blazing Saddle, answering questions about her policies and taking drink orders.

She was also spotted at popular Des Moines-based retailer Raygun with Chasten Buttigieg, the spouse of campaign rival Pete Buttigieg, where she was shopping for rainbow pride gear.

“The LGBTQ community is not a monolith with a finite set of needs, and equal rights and freedom from discrimination should be the bare minimum we accept,” she wrote in a Medium post outlining her plan.

“As president, I will do more than defend LGBTQ rights — I will stand shoulder to shoulder with the LGBTQ community in the fight for equality,” she added. “We’re in this together, because LGBTQ rights are human rights.”

.@SenGillibrand has made her return to the Blazing Saddle. “Anyone want a drink?” pic.twitter.com/cVcD8x7knp

Guy asks @SenGillibrand what her favorite drink is to order it, just gets handed hers instead
“It seems like it’s just whiskey straight!” he says #IACaucus pic.twitter.com/KnOuawvZig