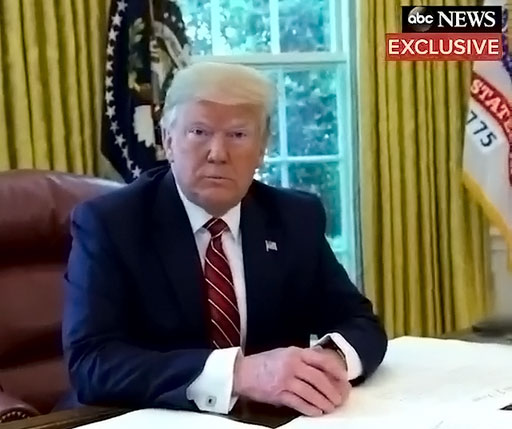 During an interview segment with George Stephanopolous of ABC News, Donald Trump stopped mid-sentence and asked for a ‘re-shoot’ of his answer because his chief of staff, Mick Mulvaney, coughed in the background.

As he was answering a question regarding his financial records, Trump stopped – as if on a television set.

“And let’s do that over, he’s coughing in the middle of my answer,” Trump told Stephanopoulos.

“Your chief of staff,” Stephanopoulos asked.

Even at the end of the interview, Trump revisited “the cough.”

Pres. Trump says he “might” turn over his “financial statement” to Congress.

“I hope they get it, because it’s a fantastic financial statement,” he tells @GStephanopoulos in the Oval Office. https://t.co/8q0FwFD9qt pic.twitter.com/fw1tIc0vxO

He actually goes back to the cough at the end of the interview. Can’t let it go. pic.twitter.com/3jfqiObHig

Text from former 2016 Trump campaign staffer: “I was told by multiple people when I came aboard to never cough or sneeze while in the presence of Trump. He thinks it’s a sign of weakness and lack of control. Nobody ever recovers.” https://t.co/9CmKeoH1iu

This man really got upset cause homebody had to cough?!? #Trump30Hours pic.twitter.com/pBRBT14QXu

With all the news made on #Trump30Hours the scene where trump condescending embarrasses the person who coughs is the most revealing. Like Lonesome Rhodes in ‘A Face In The Crowd’ the curtain is down and the emperor is wearing no clothes. pic.twitter.com/Swh7iRceKX

Does he think he is a director on a TV show set? “Cut! HE COUGHED DURING MY LINE! I can’t work in these conditions!” LOL

I like how her REALLY thought that @GStephanopoulos was gonna re-shoot his original answer!!! 😂😂😂