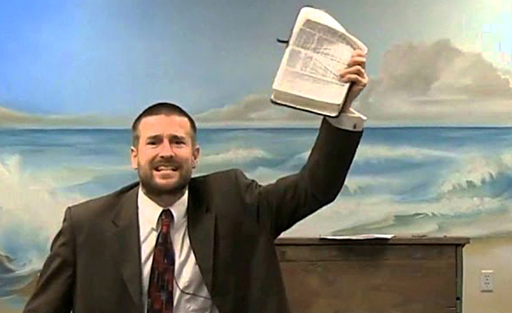 Infamous ‘Kill the Gays’ pastor Steven Anderson has become the first person to be banned from the country of Ireland.

Anderson, who heads up the Faithful Word Baptist Church in Arizona, is prohibited from entering the country thanks to an exclusion order signed by Charlie Flanagan, the Minister for Justice and Equality.

The order is the first issued under Section 4 of the 1999 Immigration Act.

Anderson was scheduled to preach in Dublin on May 26.

Flanagan signed the order after more than 14,000 people signed a Change.org petition calling for Anderson to be banned for his litany of hateful statements over the years. Another petition, organized by AllOut and LGBT Ireland garnered over 25,000 signatures.

• Celebrating the dozens of deaths resulting from the mass shooting at Pulse Nightclub in Orlando, Florida, in June 2016. The anti-LGBTQ pastor posted a video telling his congregants that the 49 people killed in the attack “deserved to die.”

• In December of 2014, he proposed exterminating LGBTQ peopleas a method to “cure AIDS.”

• Anderson shared with his congregation in 2009 that he prayed nightly for the death of then-president Barack Obama.

Several LGBTQ advocacy groups tweeted their thanks to the Irish government for banning Anderson:

Minister Flanagan stated, “I have signed the exclusion order under my executive powers in the interests of public policy.” https://t.co/QXyLhcGdQc

VICTORY!! The Irish government did the right thing and decided to block anti-gay U.S. pastor Steven Anderson from entering #Ireland where he was planning to spread hate against LGBT+ people later this month. Thanks for going All Out, everyone! https://t.co/pQBG6C5TK0

@CharlieFlanagan we are very thankful for your decision today to ban Steven Anderson from Ireland. And thanks too to @AllOut & @GCNmag for working with us to call for his ban https://t.co/L0NYGUNs4b

Ireland isn’t the first country to bar the anti-LGBTQ preacher from crossing its borders. Anderson has also been banned from the UK, Jamaica, South Africa and Canada.

In a video posted before the news of his ban, Anderson told viewers he wasn’t going to Ireland to be “talking about homos.”

“I’m not there to talk about all the other sick, perverted, filth that you have going on there in Ireland,” he added.