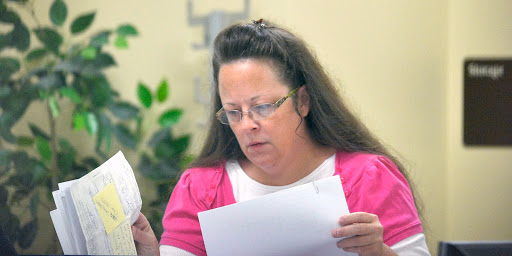 At this point, we’ve already passed the “Get The Hint” phase of Rowan County Clerk Kim Davis’ long list of losses in court in her attempt to discriminate against gay and lesbian couples looking to apply for a marriage license.

Yet again, a federal appeals court denied her motion asking that she be exempted from having her name on icky gay marriage licenses.

Davis is suing Kentucky Gov. Steven Beshear (D) and state librarian Wayne Onkst for enforcing a requirement that Kentucky clerks grant same-sex marriage licenses, which she objects to on religious grounds. She had ask the 6th Circuit U.S. Court of Appeals to temporarily halt the requirement while the lawsuit proceeds.

“Davis has not demonstrated a substantial likelihood of success on her federal constitutional claims,” the panel of judges said in their order denying the request.

Read the full order below (as we imagine sad trombone sounds in the distance);