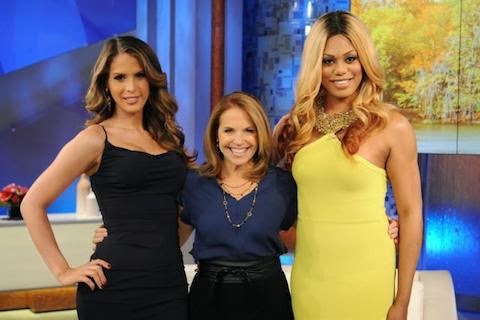 Couric introduced Carerra as being “born a man and that’s why she’s on our show.”

Once Carerra had taken her seat, Couric asked her about transitioning from male to female. “Your private parts are different now, aren’t they?” she inquired.

Carrera responded, “I don’t want to talk about it,” she said. “It’s really personal,” explaining that there is much more to her than what’s between her legs.

Couric backpedaled on the question, only to then ask her second guest, Laverne Cox, the same question.

But Laverne was ready with an eloquent and thoughtful statement about the reality of trans women’s lives in America today:

“I do feel there is a preoccupation with that. The preoccupation with transition and surgery objectifies trans people. And then we don’t get to really deal with the real lived experiences. The reality of trans people’s lives is that so often we are targets of violence. We experience discrimination disproportionately to the rest of the community. Our unemployment rate is twice the national average; if you are a trans person of color, that rate is four times the national average. The homicide rate is highest among trans women. If we focus on transition, we don’t actually get to talk about those things.”

Experienced journalist that she is, Couric replied with a simple, “That was very well put,” before cutting to commercial.

This presents a great moment to comment on the issue and idea of acceptance for transgendered people.  Every day in the LGBT community we hear how we all strive/work/hope for the world to see us all as human beings.  But even in the LGBT community, some can judge folks who may be out of their comfort zone.  “Well, I may be gay but I just don’t get the trans thing” etc….

Kids, everyone needs to get past that.  How someone lives their lives may be different from you or me or Johnny Weir, but if we all want to be accepted we’ve got to do that across the board.

I don’t encounter a lot of transgendered people on a day to day basis, but I spent most of New Years Eve with a beautiful person who is transgendered and it was not an issue.  We laughed, celebrated the New Year and it meant nothing to me how this person lived their life.

If we look to celebrate our commonalities and our differences, we have to walk the walk we talk.

As Sally Bowles says in the musical “Cabaret” – “I think people are people.”   And that’s really all there is to it.

Bravo Laverne Cox for your clear, calm, and beautiful response to a question that really led “off-topic.”  You lead by example.