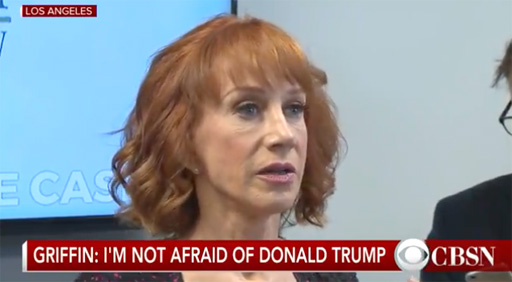 Comedian Kathy Griffin gave an emotional, sometimes rambling press conference today regarding the controversy surrounding the image and video of her holding a mask of Donald Trump meant to look like his severed head.

Standing alongside her publicist, Lisa Bloom, Griffin addressed the scandal saying, “I make mistakes. I’m an out there comedian.”

She made a point of saying her apology, issued earlier this week, still stands but added, “I don’t think I’m going to have a career after this. I’m going to be honest. He broke me. A sitting president of the United States and his grown children and the First Lady, personally, I feel, are trying to ruin my life forever.”

The former My Life on the D-List star shared that she is receiving death threats that are “constant, detailed and specific.”

I’m, personally, not sure the press conference was a good idea. In situations like this, where she did go too far, it’s best to make your apology and then step back.