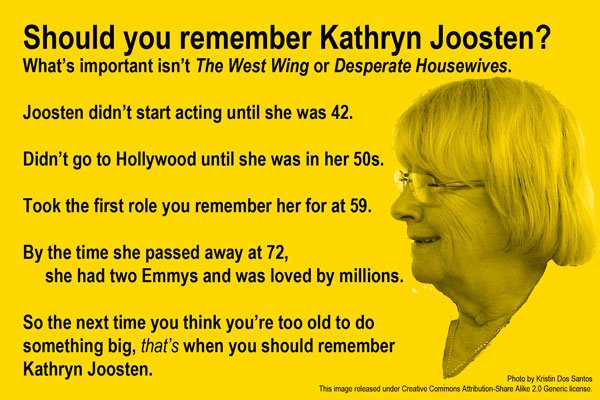 Kathryn Joosten, a character actress best known as the crotchety, yet
loveable, Karen McCluskey on “Desperate Housewives” and the president’s
secretary on “The West Wing,” has died after an 11 year battle with lung cancer. She was 72.

Joosten won two Emmy awards for her portrayal of Mrs. McCluskey, who
kept a close eye on her Wisteria Lane neighbors on “Desperate
Housewives.” The hit show ended its eight-year run on ABC last month
with a series finale in which Joosten’s character passed away. Her
character’s battle with cancer was a story line in the show.

Joosten was a psychiatric nurse and single mother in suburban Chicago
when she began her acting career at 42. She wrote on her website that
she pursued her childhood dream of acting after getting involved with
her hometown theater in Lake Forest, Ill.

She said she received her first break when she was hired to be a
street performer at Disney World in Orlando. She worked odd jobs to make
ends meet and moved to Hollywood in 1995. She said she landed her first
small role within months on the comedy “Family Matters.”

Over the years, she found steady work appearing in such popular shows
as “Dharma & Greg,” “Ally McBeal” and “Scrubs.” She became a
familiar face to fans of NBC’s “The West Wing” when she appeared as
Dolores Landingham, President Jed Bartlet’s trusted secretary.

“Some people in Hollywood think of me as a model for dramatic midlife
transitions: suburban housewife to Emmy-winning actress,” she wrote on
her website. “But I never plotted a master plan for following my
dreams.”
(source)